Merge commands (or merge codes) help you customize and automate a merge. Merge commands instruct WordPerfect how to combine data sources and form documents. Like macro commands, they resemble programming languages in the use of a language (syntax), variables, and logical operations. 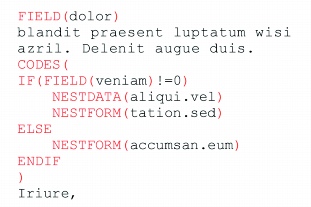 You can customize a merge by inserting merge commands. For example, if you add the DATE command to a letter, WordPerfect will replace the [DATE] code with the current date. You can also delete, display, or hide merge commands.

WordPerfect performs a specific function for each merge command. Some codes are accessible as buttons on the Merge toolbar. Other merge commands require careful placement and the correct use of parameters and other commands.